Leaving it to Chance 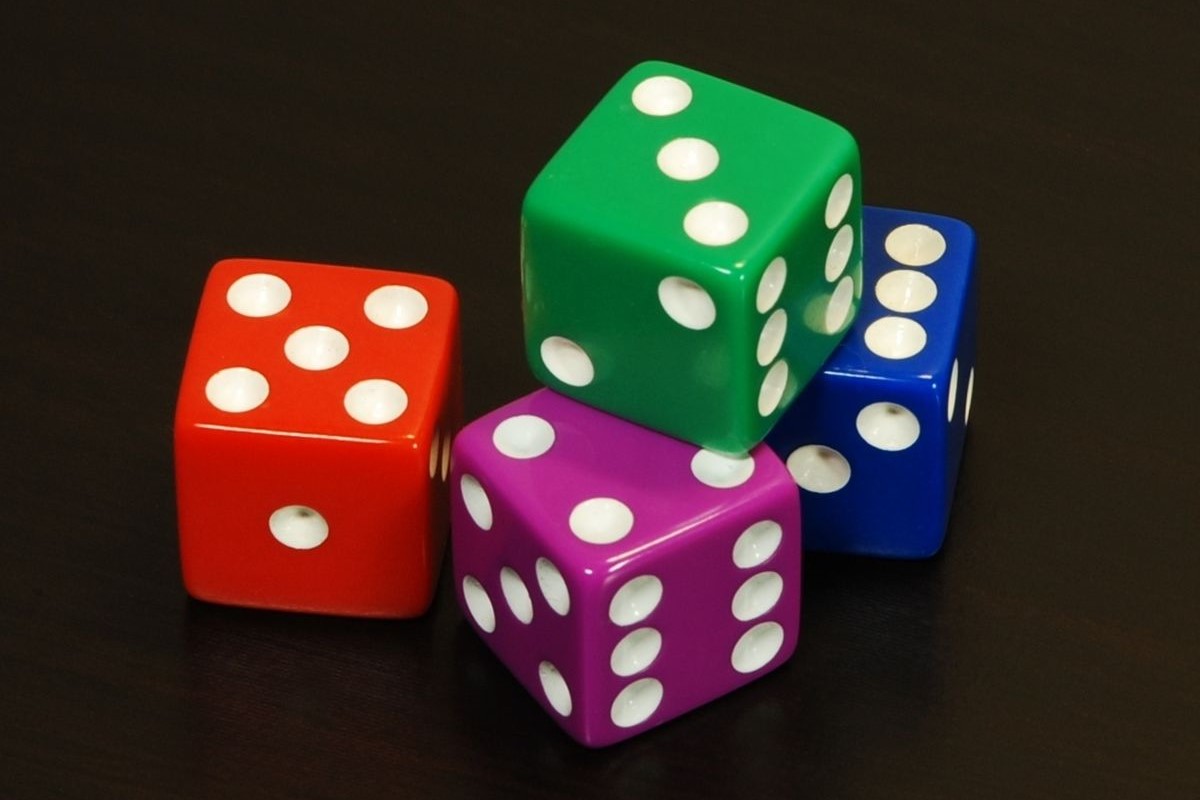 Everyone is probably familiar with the game of dice. If played with a fair set of dice then each player has an equal chance of winning.

Over a sufficient number of throws, the expected outcome is zero. In other words, if there are no costs to playing the game each player should expect to break even. Any winning streak is just a matter of luck.

There is no strategy that can be employed fairly to alter this outcome. Favoring one hand over the other, saying something during the throw, or insisting on going first or second gives no advantage.

But that does not mean that you should not approach a risky decision where you cannot control the outcome in a strategic manner.

At first glance, some decisions where you have little control over the outcome might appear to be a bit like this. And if you have to make a series of such decisions then it can appear that you have no control over how well you do.

If you cannot control an outcome you cannot move the odds in your favour that it will be the outcome you wish for. So you do not have a strategy. And the expected outcome would appear to be zero, in the absence of a strategy.

But there is often a downside. Controlling your risk can also limit how much you win and can also reduce your odds of winning.

The skill is to follow a process where even if you place yourself seemingly at a disadvantage in relation to any particular decision, you increase your long term success by limiting your chances of a serious hit.

Games are Not Always as Simple as they Appear

There’s an old story about two business friends – we’ll call them Bill and Alice – who challenge each other to a game of dice. Alice puts 3 pairs of dice on the table.

When he takes the dice, Bill notices that Alice has changed the numbering on each. However, Alice assures him that the dice are otherwise fair and that Bill can choose which pair he wishes to use.

The numbering on the dice was as follows. Let’s call the 3 pairs A, B, and C. Each die in each pair had the same numbering.

Bill hesitates. He knows that Alice liked to play games and seldom entered a game without a strategy that would tilt the pay-off in his favour. However, he also knew that Alice would not lie to him about the fact that the dice where normal other than the numbering that he could see.

Bill considered the situation for a while and then made an unusual offer. He said that he would be happy to play the game with the sets of dice offered. However, Alice must first choose which set she would use. Only then would he choose his set.

Alice decided not to play the game.

What Was Bill’s Strategy?

So, what was going on here?

When Bill said he was willing to play he must have considered that the game was not inherently loaded against him. But why would he insist on giving up the opportunity to choose between the 3 sets?

After all, if one set was preferable then surely Alice would know this and would gain an advantage by having the first choice and using this set. This would leave Bill with a choice between only 2 inferior sets.

But then Alice also refused the apparent advantage of being able to choose first.

To see what is going on here we need to calculate the percentage of games we should expect to win using each set of dice over a series of games.

The data we need are shown below. 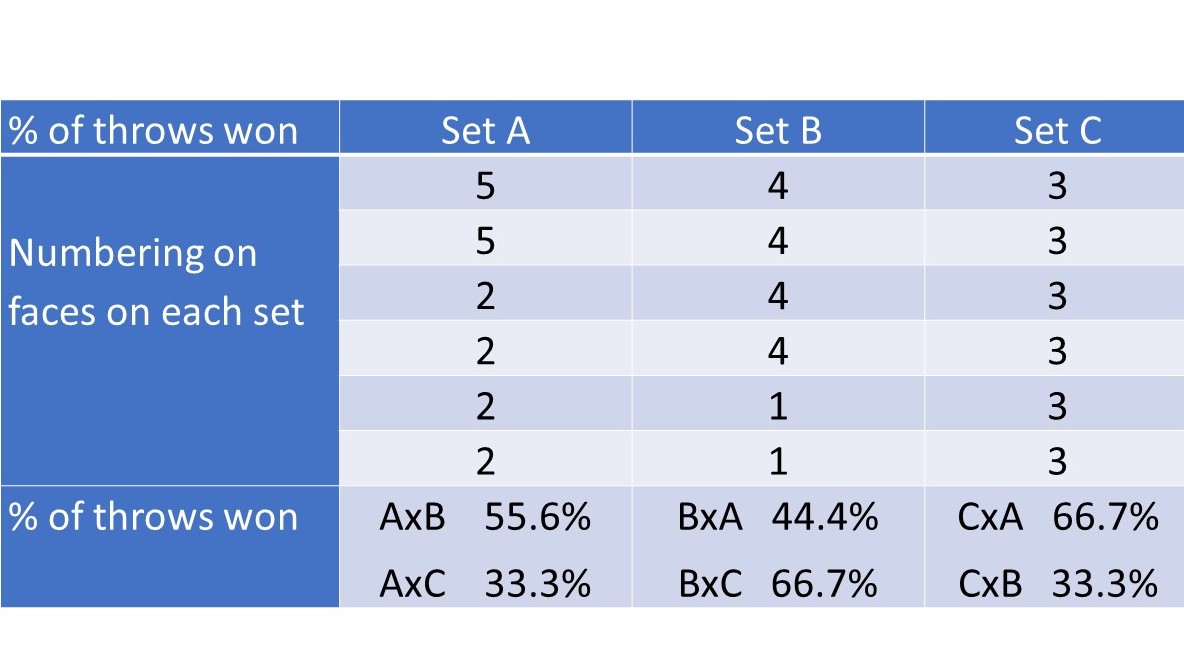 No Set of Dice are Always Superior

What emerges is that these sets of dice were what mathematicians would describe as ‘non-transitive’. This means that no set of dice can beat both of the other two sets.

For example, let’s say that Bill did not spot the implications of the numbering on the dice and had agreed to go first and chose set B.

Alice would immediately know to choose set A and so would win 5 out of 9 times the dice are thrown i.e. 55.6% of the time.

Seeing this and thinking he had learned something, Bill would want to play again and this time would probably take set A. Alice would immediately choose set C and would easily win the game since C beats A 66.7% of the time.

If he still had not copped on, Bill might decide to try his luck with set C. Alice would then simply choose set B and again win 66.7% of the time.

Sometimes it Pays to Limit Your Choices

No matter which set of dice the first player chooses in this game the second player will always win.

Agreeing to go first, while seeming to give you a better choice, is like trying to play rock-paper-scissors and showing your hand first. By agreeing to go first you are not gaining an advantage but, rather, you are providing the key piece of information to your competitor that they require to make their strategy successful.

This type of outcome is also often seen in business when the first firm to bring a new, genuinely innovative product to market does not get the greatest market share. Instead, this goes to a second firm which mostly copies the first, usually with some minor innovations, but learns from any mistakes made by the first firm thereby greatly reducing its risks and its costs.

Obviously, the series of numbering on the dice as described here was chosen to achieve this outcome. But it is only one of many options that would bring about non-transitive sets of dice.

However, it illustrates a very important lesson when faced with a decision where you have information in advance but cannot control the outcome.

There is a very important lessons here, apart from not playing dice with Bill or Alice should you encounter them.

If this is the case, your focus must be on identifying what you can control. In this case it was the decision about which set to choose.

Then you accept outcomes that you cannot determine. In this case it was the outcome of any roll of the dice.

Other Posts by this Author:

Andrew Dawson is an experienced business consultant with a particular interest in how people operate when working in big and small organisations. He writes especially about how people think, make decisions and behave in business and finance when faced with uncertainty and he draws on his considerable experience to set out how they can do better. He generally finds there is no need for deep personal or organisational change when faced with challenges. Instead, small incremental and consistent improvements realise potential.